Posted on November 5, 2018 by Adrian Hazzard

Read our report on our fascinating Industry Day at Abbey Road Studios.

MRL and Music Department folks have started collaborating on Losing Her Voice, a new opera being written and composed by Elizabeth Kelly (Director of Composition).

Losing Her Voice focuses on the life of opera diva Geraldine Farrar who transitioned from the stages of international opera, to being one of the first Hollywood silent movie stars. The work aims to re-animate archival media and position the audience as ‘Gerry flappers’, where they take part in the performance of the work from the screens of their own devices.

The premiere performance of Losing Her Voice will be at the Lakeside Arts Centre, on the 6th and 7th April 2019. I’ll be posting updates on the progress of our work.

Posted in Losing Her Voice, Performance | Leave a comment

Over the summer Adrian Hazzard from the Mixed Reality Lab (Nottingham) spent some time with Robert Thomas. Robert is a leading music composer and experience designer with an extensive track record in the creation of music which adapts in real-time to the listeners situation – like a soundtrack to your life.

Robert, who was supported by his colleague Franky Redente, was presented with an open design brief, and after a process of discussion and research they decided to create a locative audio ‘app’ for Nottingham City Centre, where playback of the audio responds to a listener’s movements and orientation. An interesting feature of Nottingham City Centre are the caves that sprawl under the city’s streets. Intrigued by this, Robert used the caves as the principle design feature for this audio walk: “There must be all kinds of stories of people’s lives who lived in or above those caves which are lost. We don’t really have that much information about the caves’ stories in detail, so imagining people’s lives in there might be interesting”. Building on this narrative, Robert wanted listeners to “hear below them into the underbelly of Nottingham”. The finished design presents a mixture of sound design elements and tense, textural music that represents the dark hidden world beneath, accompanying users as they walk around the city’s streets. One element of this audio treatment is dripping water panned in 3D that acts as an audio marker. By following the spatial placement of these drips (as sensed by a mobile phone’s compass sensor), listeners are guided along the streets to specific locales situated above the presence of a cave. Once a cave is reached listeners are greeted with rich arrangements of music composed by Robert, which portray these ‘lost’ stories.

Robert and Franky visited Nottingham for a couple of days, walking the streets and visiting the caves, where they recorded the ambient sound within them (such as the sound of dripping water) and also capturing impulse responses of the caves natural reverberation. Using these elements to drive the composition and authoring of the completed app. 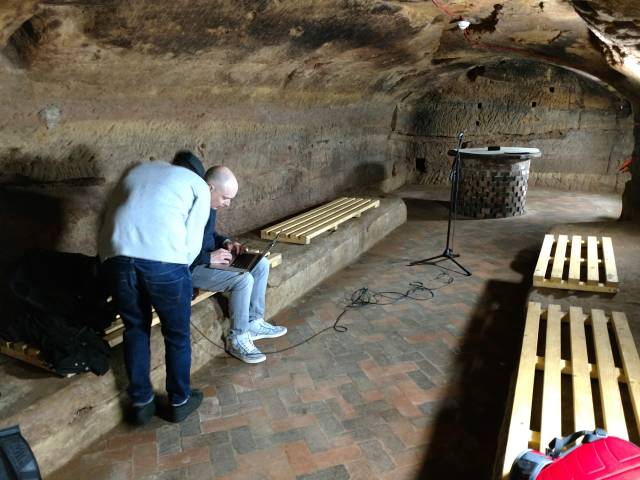 While in Nottingham, Robert also visited the Mixed Reality Lab and gave a fascinating talk about his work, the challenges of music interaction design, alongside some example of his compositional approach using Pure Data.

Climb! on its way to Finland

Climb! is off to Finland for a performance at the Iittalia Music Festival, on Thursday 14th. Once again composer of the work Maria Kallionpää will be performing Climb! alongside a selection of her other works. Looking forward to it! 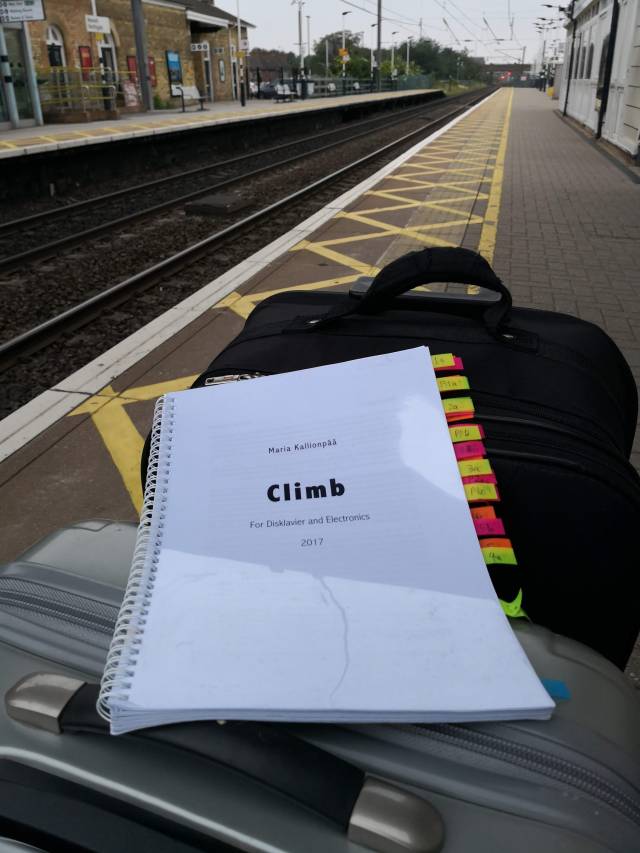 Climb! at the Reflective Conservatoire Conference 2018: Artists as Citizens

Maria Kallionpää and the MRL team presented the third performance of Climb! at the Reflective Conservatoire Conference today. The event was held at the Guidhall School of Music and Drama, at the Barbican Centre, London. It was a great mix of talks and performances… or so I heard, as unfortunately we spent all day preparing for our performance! 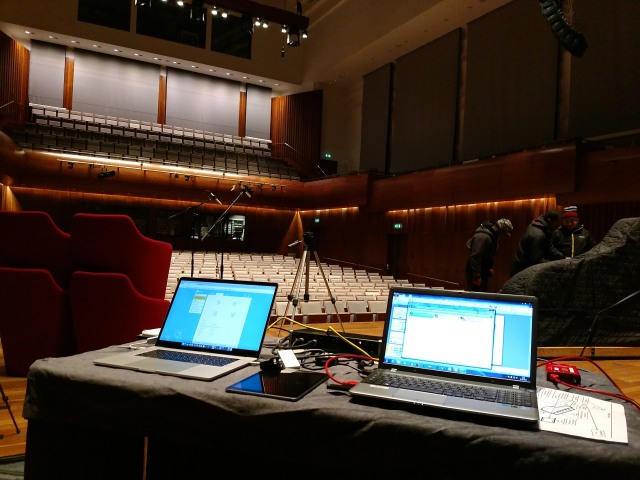 Setting up in readiness for Climb!

FAST at the ‘All Your Bass’ Festival in Nottingham

The Mixed Reality Lab in collaboration with the National Video Game Arcade and the Theatre Royal and Royal Concert Hall, Nottingham present two exciting activities scheduled for ‘All Your Bass’, a new videogame music festival in Nottingham.
https://www.thenva.com/allyourbass

1 – “Climb!” for Disklavier and Electronics, performed by Anne Veinberg and Zubin Kanga.

Bringing a new perspective to the influence of videogames on classical music composer Maria Kallionpää, the University of Nottingham’s Mixed Reality Lab and University of Oxford’s e-Research Centre present their recent collaboration “Climb!” for Disklavier and Electronics. “Climb!” is a virtuoso piece composed for live pianist, a self playing Disklavier piano, interactive system and visuals which combines contemporary piano repertoire with elements of computer games to create a non-linear musical journey in which the pianist negotiates an ascent of a mountain. Along the way the performer encounters musical challenges that determine their route, battle through uncertain weather conditions, and come face-to-face with animals and other obstacles that block their path.

Pianists Anne Veinberg and Zubin Kanga present two back-to-back performances of “Climb!”, each finding their own route up the mountain.

Specially crafted spoken stories and original music accompany you as you walk, immersing you in a rich sound world controlled by your movements and your location. View the City Centre streets through a new lens and peer into the lives of the people you meet along the way. Original texts written by members of the University of Nottingham Creative Writing Society, Jocelyn Spence and Adrian Hazzard. Original music composed by Adrian Hazzard and James Torselli.

Nott Listening commences from The National Video Arcade, 24-32 Carlton St, Nottingham, where you can loan the required equipment. The walk is free to do, but you will need to leave some security with us while the equipment is in your possession. We can facilitate a limited number of people at any given time, so you are welcome to just drop in, but we recommend that you book a slot in advance by calling Adrian Hazzard on 07983416504 or by emailing locativesound@gmail.com

This work is supported by the Horizon Centre for Doctoral Training at the University of Nottingham (RCUK Grant No. EP/G037574/1) and the EPSRC-funded FAST project (EP/L019981/1).

All Your Bass: The Video Game Music Festival

Read the Gamasutra press release about the MRL’s involvement in the first All Your Bass: The Video Game Music Festival, happening in Nottingham 19th – 21st January

The composer’s view of Climb!

Come and see the results of our exciting collaboration with composer and concert pianist Maria Kallionpää, who will perform her new interactive work for piano. Spread the word…

Composer and pianist Maria Kallionpää will give the first performance of Climb!, her new interactive work for piano, at the University of Nottingham on June 8th.

Climb! combines contemporary piano with elements of computer games to create a non-linear musical journal in which the pianist negotiates an ascent of a mountain, choosing their path as they go and encountering weather, animals and other obstacles along the way.

Climb! employs the Mixed Reality Lab’s Muzicodes technology to embed musical triggers within the composition. Like hyperlinks, these may transport the player to another point in the score when successfully played, and may also trigger additional musical effects or control visuals. Climb! also uses a Disklavier piano which physically plays alongside the human pianist during key passages, engaging them in a human-machine musical dialogue. The interactive score is delivered using The University of Oxford’s MELD dynamic annotated score renderer.

The organizers are also keen to interview people about their experience of the performance. If you are happy with this it would be very helpful if you could quickly sign at: https://nottingham.onlinesurveys.ac.uk/climb-june-8th-2017-mailing-list

The performance is part of the Nottingham Forum for Artistic Research (NottFAR) concert and events series.

Here’s a link to an interview with me, talking about my role in the EPSRC FAST project.